My assignment over this past weekend for my Teaching the Bible class was to write a really short, children's story about Noah's ark from an animal's perspective. (This was to show one way of incorporating creative writing into Bible/Sunday School classes.) We had so much fun yesterday reading our stories to the class! I was surprised by how different each story was--everyone is so creative! 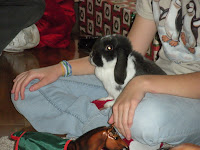 Anyway, I thought it would be fun to share my story with all of you. =) I chose to write about a bunny's perspective, and I modeled the bunny after my sister's pet, Candy (pictured left). Enjoy!

Candy the gray-and-white, lop-eared bunny felt a drop of water splash on her soft head. She had never seen such dark, ominous clouds before, and her little body trembled at the grumbles of the changing weather.

The people had been acting so strange lately. One man had been building a huge wooden house of some sort, and nobody listened to him as he spoke to them in urgent tones. Now his structure was complete. Candy had watched all sorts of animals follow him into the big house, going in by twos, as she sat amid the leaves of a bush.

Stretching her hind legs she peered out between the branches and let her flat nose sniff the air. Suddenly, gentle hands reached down and picked her up, and she was carried into the house.

“We almost missed this little one,” the person holding her said to what must be his family. She was set down by another bunny in a little grass-strewn room, and then the big door of the house was shut tight.

For many days Candy listened to water hitting the now floating rectangular house. She felt safe inside with all of the other animals and the kind people who fed her and petted her fuzzy ears.

One day she hopped out of her stall and watched in awe as a window was opened and bright sunlight fell across the wooden floor. A raven and a dove flew out the window, and later on the dove returned.

A week later the dove was sent out again and she came back with something green. Candy was excited—perhaps soon she would get to see fresh green food again, and her ears would grow longer and her feet would grow bigger!

Candy didn’t know how much time had passed since the dove returned, but one morning she awoke to find herself in the man’s arms, being carried outside, where the water was gone and the sun was shining. The man gently set her on the ground and patted her head.

Her other bunny friend joined her and they began to hop down the mountainside. So much space to play in! Taking one last look back, she saw a beautiful, multi-colored rain-light in the sky. For some reason it made her feel happy and protected as she hopped in search of green, green grass.
Posted by Amber Holcomb at 1:00 AM

Aww, so sweet! I love rabbits! Although I suppose I am biased since I showed them so much in 4-H.... :P

That was soooooo cute!! Kids would LOVE that story in Sunday school! Thanks for the smile :)

Very sweet Amber! You should read it to the kids at AWANA. I can say that Candy is one of the sweetest bunnies ever. I love to hold her!
Have an awesome day tomorrow and soon I will be there to pick you up for spring break! Yeah!!!
Love,
Mom

Isn't that a fun writing prompt? :) It was great to hear what others in the class came up with!

Thank you! It's interesting to look at things from a different perspective. :)

And great job on your reading challenge progress!!

Rabbits are so cute! :) That's cool that you showed them in 4-H!

I'm glad you enjoyed it! Thank you for reading the story! :)

Awww, thanks, Mommy! Candy was such a sweet inspiration for this story. I know how much you love to hold your baby! ;)

I hope you have a wonderful day, as well, and I can't wait for you to come pick me up!!! It will be so fun to just talk all the way home and catch up again... I miss you!