The Surprising Legacy of a Serial Killer | Review of The Progeny 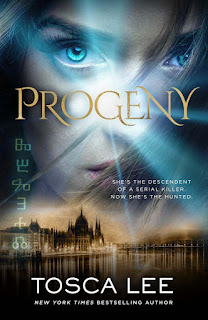 Emily Jacobs is the descendant of a serial killer. Now, she’s become the hunted.

She’s on a quest that will take her to the secret underground of Europe and the inner circles of three ancient orders—one determined to kill her, one devoted to keeping her alive, and one she must ultimately save.

Filled with adrenaline, romance, and reversals, The Progeny is the present-day saga of a 400-year-old war between the uncanny descendants of “Blood Countess” Elizabeth Bathory, the most prolific female serial killer of all time, and a secret society dedicated to erasing every one of her descendants. A story about the search for self filled with centuries-old intrigues against the backdrop of atrocity and hope.

Um, wow!! The Progeny is an engrossing read with a touch of history and a whole lotta twists and turns.

This book prompted me to do a quick search of Elizabeth Bathory online, and talk about super creepy and tragic stories surrounding her life and legacy. The Progeny tosses around the idea of whether or not the accusations are completely true, but if they are...the implications are incredibly disturbing.

Fast forward to the fictional world of Emily Jacobs, a girl who chose to have her memory erased—and now she doesn't know why. If only the past she purposely forgot didn't catch up to her in the form of two men with questionable motives.

And now she's on the run from a threat she can't remember.

Unfortunately, as this is the first in a series, there are still plenty of unanswered questions and a lot left unresolved. Warning: This is definitely not a stand-alone. And I'm left with uncertainty as to how I feel about all the revelations and the dilemmas yet to be solved.

But there are some great lines and questions raised, and fans of dark, suspenseful (but not over-the-top disturbing), YA-style fiction should find this a fascinating start to the Descendants of the House of Bathory series.

*With thanks to NetGalley and Howard Books for providing me with an e-ARC of the book in exchange for my honest opinion.*
Posted by Amber Holcomb at 1:00 AM 6 comments: