A Compelling, Heartbreaking, Powerful Read | Review of Hidden Among the Stars 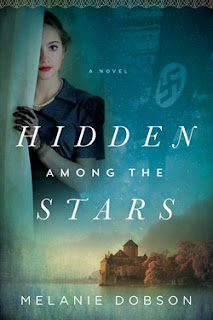 About the Book (from Tyndale House)

From the award-winning author of Catching the Wind, which Publishers Weekly called “unforgettable” and a “must-read,” comes another gripping time-slip novel about hidden treasure, a castle, and ordinary people who resisted evil in their own extraordinary way.

The year is 1938, and as Hitler’s troops sweep into Vienna, Austrian Max Dornbach promises to help his Jewish friends hide their most valuable possessions from the Nazis, smuggling them to his family’s summer estate near the picturesque village of Hallstatt. He enlists the help of Annika Knopf, his childhood friend and the caretaker’s daughter, who is eager to help the man she’s loved her entire life. But when Max also brings Luzia Weiss, a young Jewish woman, to hide at the castle, it complicates Annika’s feelings and puts their entire plan—even their very lives—in jeopardy. Especially when the Nazis come to scour the estate and find both Luzia and the treasure gone.

Eighty years later, Callie Randall is mostly content with her quiet life, running a bookstore with her sister and reaching out into the world through her blog. Then she finds a cryptic list in an old edition of Bambi that connects her to Annika’s story . . . and maybe to the long-buried story of a dear friend. As she digs into the past, Callie must risk venturing outside the safe world she’s built for a chance at answers, adventure, and maybe even new love.

I've read a few of Melanie Dobson's books, and this is my favorite so far! In the contemporary story line, the initial setting of a children's bookstore is whimsical and safe, and the latter setting is haunting and romantic. I enjoyed following Callie's progress as she seeks out answers with tenacity and subtle hope. As she faces new challenges, she is skittish and yet strong in the love of others.

The historical story line is so compelling and heartbreaking. I will say that, while the back cover description definitely piques interest, I do wish it didn't give quite so much away. I think if it held back a bit more, there'd be more room for wondering and uncertainty. Even still, while some twists might be a bit easy to guess—at least in general—I found myself surprised and touched by the details.

Each character in the pre-World War II timeline has their own depth, hurts, and difficult choices to make. The back cover description made me worried about a painful love triangle, but the complexities of the story and its characters put such worries to rest. Yes, this story is painful, but not petty. It's poignant in the best of ways. Annika and Luzia both won me over, and I found one scene toward the end to be incredibly powerful, aching, and beautiful in its portrayal of faith.

Hidden Among the Stars is illuminated with hope, as gentle and sparkling as starlight in incredibly dark circumstances. With engaging descriptions, relatable characters, and a grandly pieced plot, this is a story to love.

*With thanks to the author and Tyndale House Publishers for providing me with a complimentary copy of this book. Opinions expressed in this review are my own.*

Also by Melanie Dobson...
Chateau of Secrets {my review}
Shadows of Ladenbrooke Manor {my review}
Posted by Amber Holcomb at 10:36 AM