The Tales of Goldstone Woods Continue!

There's a fantasy series that has moved me to tears and enchanted me with its characters and descriptions - and that would be the "Tales of Goldstone Woods" series by Anne Elisabeth Stengl! I'm very excited for the upcoming release of the fourth installment, Starflower (expect a review of the book in November!).

But I'm also very excited to share the cover and book description of the fifth installment, Dragonwitch, which is releasing next summer! 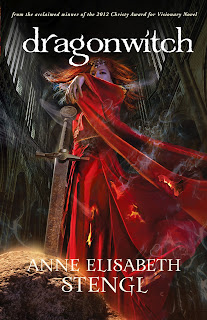 Long ago, Etanun buried his sword in the depths of the Netherworld then vanished from all known history. One day, it is said, his heir will find the sword, and the Dragonwitch, firstborn of the Dragon King, will be finally slain.

These stories are no more than nursery rhymes. In a world of cold reality, what room is left for fairy tales? Lady Leta of Aiven is pledged to marry a man she does not love . . . sleepless Lord Alistair struggles to unite the stubborn earls of the North Country . . . Mouse is lost, far from home, slaving as a kitchen drudge . . .

. . . and the reclusive Chronicler, keeping the records of Gaheris Castle, bears a secret so dangerous it could cost him his life and plunge the North Country into civil war.

But when nursery rhymes begin to come horribly true, will these unlikely heroes find the strength they need to fulfill a prophecy of fire? For the Dragonwitch lives. And she has vowed vengeance on all who have wronged her.


Isn't that quite the cover?? It's very different than the other books in the series (Heartless, Veiled Rose, Moonblood, and the soon-to-be-released Starflower): 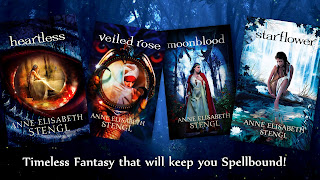 Those other covers are all gorgeous in their hues of blue and fascinating in their depictions of the heroines. (I can't wait to see the cover of Starflower in person!)

This latest cover sets quite a different tone - much more intense as it draws the eyes upward along the length of the sword, following the trail of smoke rising, and emphasizing the gray, barred windows and the title of the character depicted, the Dragonwitch. No tranquil or even eerie blue here - just gray and fiery red.

I'm intrigued to see if this very different cover indicates a very different type of story than the previous books in this series. But I'm sure it will be like the first four books in one thing, at least: great storytelling. Anne hasn't let me down yet in the first three installments!

If you're new to the series, I highly recommend reading all of the books in order. I think it's a much richer experience that way (and it probably is easiest to understand that way, too!).

Great post! Love that you talked about the series a bit at the end. I love each cover as they each capture the story within (I'm assuming Starflower's cover will do that...). No way I can pick a favorite.
You're right that Dragonwitch is different from the others, it'll be exciting to find out what happens next summer!

Awesome post, Amber!
You really captured the beauty of these books in your comments and intrigued us without giving anything away! I can actually feel your excitement in this post :) Well done, blessings!

Hi Amber,
Great post! I know what you mean by the cover drawing eyes up the length of the sword. The cover designer did such a great job.

I can't decide between moonblood and starflower. In fact, I'm not picking. Talk about a kid in a candy store!

Your excitement has got me looking forward to the review and the book!
:):)

Thank you! Aren't the covers great at conveying the feel of the story? :)

Yeah, the Dragonwitch cover is definitely different - should be a great read! It will be fun looking forward to its release next summer. :)

Thanks for stopping by!

Wow - that is such a sweet thing to say! I'm so glad you enjoyed the post, and I'm grateful for your comment! :)

I agree! The people who designed this cover (and the others in the series) are quite talented. :) I'm partial to the Bethany House book covers - they're wonderful!

And hahaha, I love that - a kid in a candy store! I definitely love me some cover candy! ;) And these ones are very satisfying!

I think my favorites so far are Heartless and Starflower (although I haven't seen Starflower in person, and I think the experience of seeing it online is different than seeing it in person, to some degree - it can either meet expectations, blow them out of the water, or not look quite as pretty in person). Dragonwitch is just so different, so I'm not sure where it fits on my "like" scale, LOL!

Even with a cover reveal, you have such a beautiful way with words! :)

As much as I love ALL of the covers, I'm still pretty partial to Starflower. I can't wait to see it in person, either.

You are too sweet!! Thank you so much for your kind words! :)

I'm rather drawn to Starflower, too - it's just sooo pretty! I also really like the design for Heartless...and this latest one is kind of winning me over in a different way with its intensity and perspective. :) But they all are pretty great, aren't they?

Thank you for sharing your thoughts here!