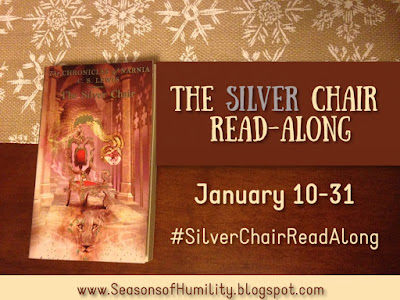 Welcome to the second discussion of The Silver Chair read-along! (You can check out our first discussion HERE.) If this is the first you've heard of the read-along, you can learn more about the schedule in this invitation post.

Today we're going to discuss chapters 7-11. If you've read them, go ahead and share your thoughts in the comments section or in your own post! (Feel free to use the image above, linking back to The Silver Chair read-along tag.) If you still have to catch up, you're welcome to check in whenever you're ready. :)

Discussion Format: your favorite quotes, general impressions, and four questions to answer for each week's reading 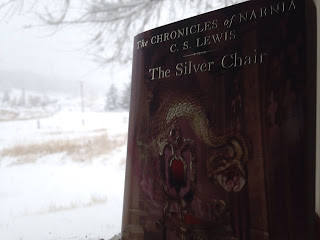 Well, quite a lot happens to our three adventurers in these chapters! It definitely seemed obvious that all the talk of a giants' feast would include the three smaller creatures on the menu...but as they admit to themselves later on, their arrival at Harfang is filled with the children's hopes and expectations, not wisdom and caution and a focus on their mission.

I like the turn the story takes when Eustace and Jill finally wake up from their self-absorption (I can sadly relate to how it easy to get caught up in a quest for comfort!). It's great to see them work together, along with Puddleglum, in order to escape the giants' castle.

And um...the Deep Realm they unwittingly discover is creepy! (It also has me wishing I could remember more details from The Last Battle; surely some of the things we learn in this story about the sleeping creatures and Father Time come up again in the last book...?)

Then there's the Black Knight and our introduction to the silver chair and its significance. I'm so proud of Jill, Eustace, and Puddleglum for choosing to stick to Aslan's sign rather than heed their own limited (and sometimes false) knowledge, uncertainties, and fears! And I love how Puddleglum is proving to be a great role model for the other two through his unwavering faith in who Aslan is, and through his unwillingness to be taken in by appearances or creature comforts.

It's a relief to have Prince Rilian set free from enchantments...but what a cliffhanger! I'm eager to see how the group escapes the Deep Realm. 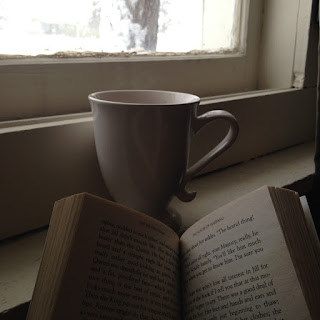 Answer one, two, three, or all four of these questions in the comments section or in your own blog post!

1. Which character's journey/growth resonates with you the most so far? Do you relate more to Eustace, Jill, or Puddleglum—or perhaps Prince Rilian?

2. Did you find yourself liking the giants at any point in these chapters, or did they seem like villains to you from the beginning?

3. Which moment in these chapters made you feel the most emotion, be it frustration, relief, aversion, eagerness, or happiness?

4. What are your first impressions after meeting Prince Rilian and seeing the role of the silver chair in the story? If you've read the book before, do you remember what you felt when you read chapter 11 and discovered the truth about the Black Knight?


Join us next Thursday for our third and final discussion!
(Chapters 12-16)

I loved the quotes you chose! Especially the second one! As always, loved your post and your insights into the characters and thoughts on the story. I too wish I could remember all that happens in the last book. I just bought all of them for my Kindle as I noticed that my paper copies are getting rather old so I'm definitely going to have to go back and re-read the series now. Here is my post for this week: https://myfavoritepastime.blogspot.com/2019/01/the-silver-chair-read-along-discussion-2.html

There are a lot of great lines in this story, aren't there? That second quote is a great reminder, for sure!

And thank you so much!! :) I'm so glad you're enjoying the read-along, and I love that you're updating your Narnia collection in ebook format! I know this is probably terrible to admit, but I previously got rid of my copies of other books in this series...I probably should have hung on to the ones that have similar covers, at least! But I'm glad I kept this one with the hope of finally finishing the series, and I'm happy to be reading it with you and MovieCritic. :)

I can't even tell you Amber how many sets of these books we have bought over the years so we could share them with friends and family. I'm excited to have them on e-book now as my set are getting discolored pages and it is getting harder for me to read a "real" book anymore. Looking forward to MovieCritic's post this week :)

Great thoughts, Amber! I really love that fourth quote you used! Puddleglum really is such a good influence for Jill and Eustace with his faith in Aslan! These last few chapters are my favorites and I can't wait to hear your thoughts on them. And, great photos!
Here are mine for this week, sorry that they are a week late!
https://moviesmeetmatch.blogspot.com/2019/01/the-silver-chair-read-along-part-ii.html

Julie, I'm excited to read your thoughts first thing tomorrow morning! :) I'm sorry that I am so behind!

Thanks so much! I do love Puddleglum's character and how he clings to his faith in Aslan. :) And I do think the last chapters were my favorite, as well! So good!

Will stop by your last two posts shortly! I'm so glad you've been part of this read-along. :)