New and On Sale from Anne Elisabeth Stengl 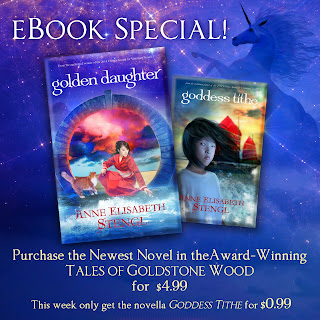 If not, you're missing out on some epic, thought-provoking adventures!

But don't despair! :) This week you can snatch up the lone (for the time being) novella, Goddess Tithe, for only $.99 in ebook format. And the rest of the books in the series, including the brand-new Book 7, are only $4.99 each.

I confess I've fallen a bit behind on this series... (It amazes me how Anne Elisabeth can churn out such in-depth stories!) I still need to read Dragonwitch and Shadow Hand, as well as Goddess Tithe and Golden Daughter. And here Anne Elisabeth has already announced the title for Book 8! Check it out... 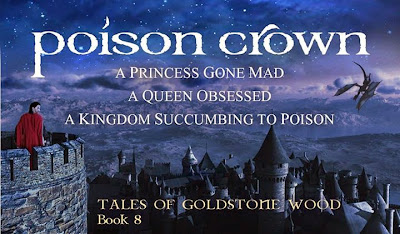 Doesn't she have some of the coolest book titles? Here they are in series order...

And the covers are just as colorful and unique! 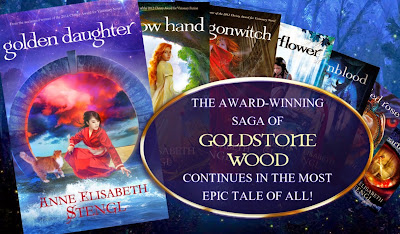 The latest one reminds me a bit of Lisa Frank. Especially with the stars and unicorn featured on the back cover...

I imagine Golden Daughter is much more intense than the cuteness and cuddles of Lisa Frank's artwork, but the pretty design that sparks childhood memories still makes me happy. :)


Tell me, which title and/or cover is your favorite so far? And if you've read the series, do you have a favorite among the stories? I'd love to hear your thoughts!
Posted by Amber Holcomb at 12:30 AM

I've only read the first two in the series, but of the two I much prefer Veiled Rose over Heartless. And my favorite cover so far is definitely Shadowhand. This next book definitely sounds amazing and intense and I can't wait for this one to release and to see the cover. I have a feeling this new cover may end up taking the cake for the prettiest cover in the series. :)

Heartless is a different sort of story than the rest, although it does set the stage for all the books to come. :) My favorite of the first four is Starflower, but I'm looking forward to reading the next few and seeing if I find a new favorite!

I'm totally with you on the cover - I believe Shadow Hand is my favorite, as well! Simply gorgeous with the colors and the scene. Definitely curious to see how the cover for Poison Crown turns out. :)

Thanks for stopping by to share your thoughts, Alyssa!