Are you ready for this? The Ilyon Chronicles by Jaye L. Knight continues with Book 2, The King's Scrolls! (Curious about Book 1? Check out all the blog tour fun we had back in May!)

The book should be releasing in early 2015. Here's the blurb:


Following the harrowing events that brought them to Landale Forest, Jace and Kyrin have settled comfortably into their new lives and the mission of protecting those under the emperor’s persecution. The fast approach of winter brings with it the anticipation of a quiet few months ahead. That is until the arrival of four mysterious, dragon-riding cretes who seek aid in a mission of great importance—not only to their own people, but to all followers of Elôm.

Hidden in the vast mining valley north of Valcré, a faithful crete has spent years sharing his knowledge with the destitute miners and their families and is known to possess what may be Arcacia’s last surviving copies of the King’s Scrolls—the Word of Elôm. Joining the cretes, those in Landale must find the crete teacher and bring him to safety, but it is a race against time. Should Daican’s men find him first, execution and the destruction of the Scrolls is certain.

When disaster strikes, all seems lost. Could Elôm have a plan even in the enemy’s triumph?

And here's the cover! 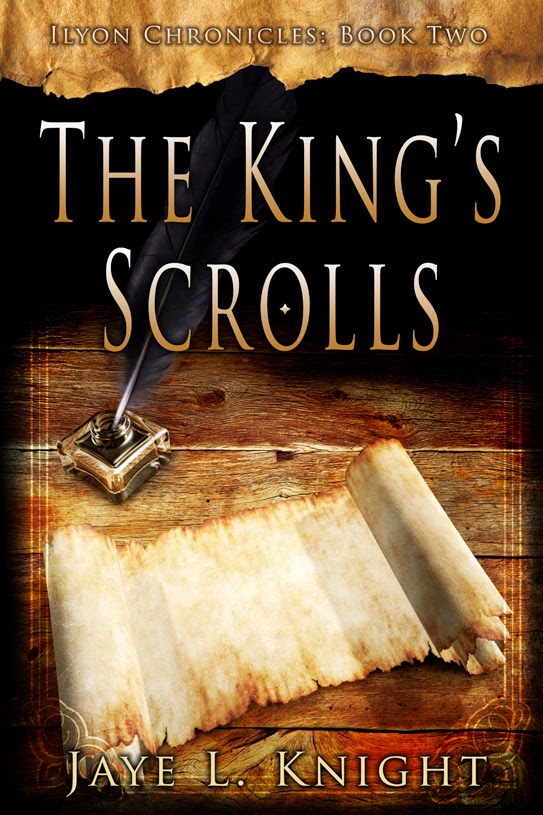 
Jaye has some awesome branding going on with this series, and I love how clear it is through the covers that the books go together. (Click HERE to see Book 1 on Goodreads.) The images on this cover fit hand in hand with the title, and there's a definite sense of mystery in the darkness beyond the quill and even in the blank scroll. It says, "There's a story waiting to be written. Open the pages to discover it." :) Nicely done! And how fun is it that one of the giveaway prizes so perfectly matches the quill on the cover? Be sure to keep on reading to learn more about that...

Find a list of other cover-reveal participants on Jaye's blog today.

Excerpt from The King's Scrolls

The other younger crete took a swig of his coffee and set his eyes past her. Kyrin peeked over her shoulder at Kaden who, of course, was staring at the dragon. The female creature stared back in mutual interest.

“Go ahead,” the crete said suddenly. “You can touch her. She loves attention, and she’ll only attack if I tell her to.” A sly glint sparkled in his spring-green eyes.

Besides Jace, Kyrin had never seen anyone with such bright and colorful eyes as these cretes.

Kaden looked at him, his brows rising. “You can do that?”

The crete nodded. “Dragons are highly intelligent. You can teach them almost any command. Storm here is young, but she learns fast.”

Kyrin smiled at the delight in her brother’s eyes as he stepped closer to the dragon and ran his hand over her bluish-gray neck scales. A grin split his face.

Kyrin stepped to his side and laid her hand on the dragon. The scales were indeed very smooth, reminding her of the polished marble stair-railings in Auréa Palace, but they weren’t cold. Warmth radiated through them. The dragon, still watching them, let out a little rumble, almost like a giant cat’s purr.

“I told you she liked attention,” the crete said, grinning.

Kyrin chuckled and glanced at Jace to see if he wanted to touch the dragon, but he made no move to come closer. This certainly had more to do with the crete than the dragon. He was very fond of any type of animal. She faced the crete again.

“So they can breathe fire?”

“For short bursts, but that’s usually all it takes to deter any threat.”

“That’s incredible,” Kaden breathed. While he continued admiring Storm, Kyrin observed the dragon’s rider. He appeared to be in his early to mid-twenties—about ten years younger than Captain Darq—though his exact age was impossible to guess. Cretes were said to mature faster than humans, so he could be anywhere from seventeen to twenty-five. He too wore a sleeveless jerkin. Brown tattoos, a little darker than his skin, marked both shoulders. Darq and the other cretes had them as well, but Kyrin hadn’t taken a good look at them until now. This man’s were a complicated pattern of spirals and dots, but the shape of a fox stood out in the center of his right shoulder. Though she tried to be discreet, he must have caught her studying him and suddenly extended his hand to her. “I’m Talas, by the way. Talas Folkan of the Fox Clan.” 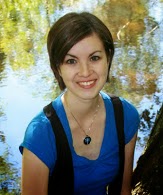 Jaye L. Knight is a homeschool graduated indie author with a passion for writing Christian fantasy and clean new adult fiction. Armed with an active imagination and love for adventure, Jaye weaves stories of truth, faith, and courage with the message that even in the deepest darkness, God’s love shines as a light to offer hope. She has been penning stories since the age of eight and resides in the Northwoods of Wisconsin. 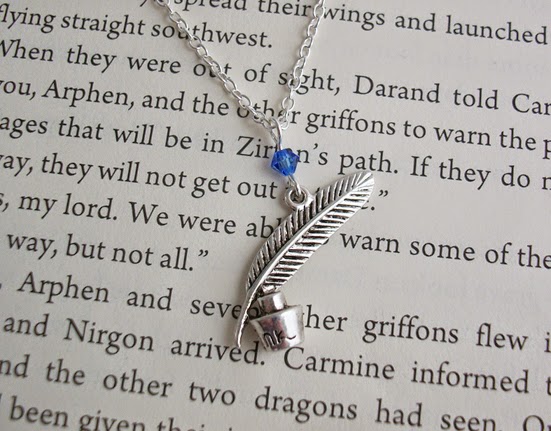 To celebrate her revealing of the cover, Jaye is giving away one of her handcrafted quill pen necklaces and a $5 Amazon gift card! Enter for a chance to win using the form below! U.S. entries only please.

a Rafflecopter giveaway
Posted by Amber Holcomb at 9:00 AM

Thank you so much for being part of the cover reveal, Amber! :D This has been so much fun! I can hardly wait until I can actually release the book and share the next chapter of this adventure!

My pleasure! Such exciting times. :D Aren't cover reveals the best?? Definitely a lot of fun. But I guess the actual book release is exciting, too. ;) Looking forward to it!

I LOVED the first book and have been honored to have a chance to beta read the second. I adore Jace and love spending time with him so much.

Jaye has amazing covers. Eye catching and simple, she knows how to get reader's attention.

The first book was wonderful! A pleasure to proofread, as Jaye had already done a thorough job of crafting and editing. :) That's awesome that you beta read this one, and I have no doubt it's a great sequel! Jace is indeed an intriguing and lovable character.

And Jaye has also done a great job with the covers, for sure! They fit well together and make the most of epic symbols.

Thanks for stopping by - and for following!