My Review of Sapphire Ice 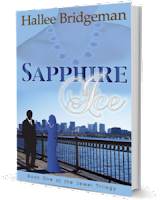 Here's a description of the book from the author's website:

"To Robin Bartlett, men were nothing more than violent users. After a hair-raising childhood, Robin and her two younger half sisters battled simply to survive. Determined to give her sisters a very different life from that of their mother; to never have to rely on a man for anything, she worked two jobs and put them both through college, while accepting help from no one. Her heart had turned to ice and she had no use for men or God.

Antonio 'Tony' Viscolli had grown up on the streets, homeless. At seventeen, he entered a downtown church with the intent of casing it, but found himself on his knees at the altar. After being fostered by the youth minister, Tony followed God’s leading and eventually became a very successful and powerful businessman. In a fallen world, he was a gem.

When Tony bought the restaurant where Robin bartended, she immediately resented his intrusion into her well ordered, but exhausting, life. She suspected his offering her special attention and constant kindness was merely his way of expecting something from her in return, something she wasn’t willing to give.

In this first installment of the "Jewel Trilogy," three sisters struggle to understand one another and to figure out how they can best help one another in a time when they're all trying to move on from a difficult past and build a foundation for a better future. Robin, Maxine, and Sarah make for an interesting study in contrasts, and this introduction paves the way for more unique reads. Sapphire Ice focuses on Robin's love story - a story that has many familiar elements, but some unexpected touches.

Something about this book held my interest and made me want to keep coming back to it and find out more. The characters are intriguing. Tony and Robin have a lot of issues, and they start out with some big communication problems - so there is a sense of mystery as to how they will resolve their differences and make a relationship work. The roles of "handsome, rich man" and "hard-working, poor girl" are nothing new, but the specifics of their situations - along with Tony's Italian background and his choices - make the plot fresh.

The content is "edgy" and yet bordering on "preachy," which is a different sort of combination. I like how the story offers a hopeful outlook and an emphasis on repentance, but some things did come across as too convenient/quick to me in how they were portrayed. Also, the structure and writing could use a little bit of polish to remove some flaws so it sparkles all the more... (One thing that's a little frustrating is all the POV shifts without any demarcation, which can disrupt the flow.)

Sapphire Ice is a sometimes daring, sometimes heavy-handed inspirational romance story. It suggests that this series has a lot of potential, and overall it is an enjoyable, interesting read on its own.

*With thanks to the author for providing me with an e-version of the book in exchange for my honest opinion.*
Posted by Amber Holcomb at 6:00 PM

Email ThisBlogThis!Share to TwitterShare to FacebookShare to Pinterest
Labels: review