My Review of The Ryn 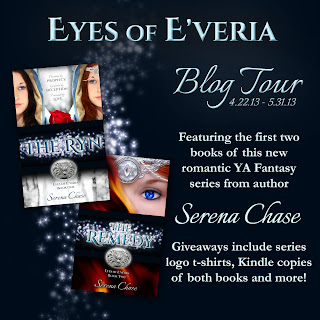 Today I'm sharing my review of The Ryn as part of Serena's blog tour! At the bottom of the post is the Rafflecopter widget for an awesome giveaway, so don't miss that! And check out this cover reveal post to learn more about Serena and the cover of The Ryn's sequel, The Remedy. Happy reading, everyone!

Here's a description of the book from the author's website:

"DESTINED by prophecy. GUARDED by deception. PURSUED by Love.

Centuries ago, an oracle foretold of the young woman who would defeat E’veria’s most ancient enemy, the Cobelds. But after two centuries of relative peace, both the prophecy and the Cobelds have been relegated to lore—and only a few remain watchful for the promised Ryn.

Finally, a child is born who matches the oracle’s description, but a Cobeld curse accompanies her birth. Led to believe they succeeded in killing the prophesied child, the Cobelds emerge from hiding with plans to overtake the Kingdom.

But the child survived.

Secreted away and called 'Rose' for the first nineteen years of her life, Rynnaia E’veri has no idea of her true identity until a chance meeting with an injured knight reveals not only her parentage and true name, but the task assigned her by the oracle: discover the Remedy that will destroy the Cobelds’ power.

Now, her time has come.

Offered the assistance of pirates, scribes, storytellers, a young woman who died centuries ago, and the knight who is quickly working his way into her heart, Rynnaia is fortified with friends. But if the Ryn is to complete her task, she must come to terms with not only who she is, but for whom she must be willing to die. For the kingdom’s survival depends on her.

The Ryn is an epic and engaging story that combines so many delightful elements: fairy-tale pieces, bits of fantasy, swirls of colorful surprises, and generous helpings of familial and romantic love. I love the suspense, brought about not only by the danger, but by the anticipation of unfolding events and revelations. One of those revelations brings about such a great twist to the storytelling - one that is sudden but awesome in its cleverness. There's so much creativity at play in this story, and I love the passion behind it and the excitement that permeates it!

Some great characters are introduced in this first book in the "Eyes of E'veria" series, including a hero that quickly stole my heart, a talented and over-protective brother, a handsome-and-he-knows-it pirate, and many more. The ending moves at a bit of a slower pace, but there are some fabulous scenes in there, and it builds a foundation for the sequel (The Remedy), which I am really looking forward to reading! For a unique and wonderful re-imagining of a fairy tale, The Ryn has a lot to offer, and I hope this will only be the beginning of a long list of books penned by Serena Chase!

*With thanks to the author for providing me with an ARC e-version of the book in exchange for my honest opinion.*

a Rafflecopter giveaway
Posted by Amber Holcomb at 1:00 AM

Email ThisBlogThis!Share to TwitterShare to FacebookShare to Pinterest
Labels: review

Thanks for being a great beginning to the blog tour, Amber! So happy that you enjoyed the story!

I have been seeing some great reviews of this title...excited to check it out! :)

I love covers of both books, and would be delighted with a chance to read them! :)

Just finished reading The Ryn last night and posted my review this morning. Loved it! And have already started The Remedy! So looking forward to getting into it and finding out what happens! Great review Amber as always!!

REL: It's awesome! Everyone seems to be loving it, as well they should! ;) Can't wait to read The Remedy!

CHARITY: Aren't the covers gorgeous? I love them, too! Hope you get to read the books soon!

JULIE: Awesome! And that's great that you've already started The Remedy! It's been a few months since I read The Ryn, so it will be exciting to get back into the story when I start The Remedy! :)

I have been hearing so many awesome things about this book and I really want to read it! It looks so good!

The reviews really have been overwhelmingly positive! :) The first one is great, and I imagine the second one will be, too! Hope you get to read them soon! :)

Oh my goodness! Wasn't it awesome?! I could hardly catch my breath through the first half. Such a fabulous story!Can't wait to read The Remedy. :D

Very much so! :) And yes, that first half flew by with so many twists and turns and danger-filled happenings! Definitely looking forward to diving back in via The Remedy! :)

I'd agree with Charity! Both covers look very intriguing!

I agree, too! :) I think they turned out fabulous, and they have a great fantasy/fairy-tale vibe to them (plus they're just so pretty!).

Thanks for stopping by! :)

Okay, I've become very interested in this book. I love a really good fairytale and this sounds promising!

I don't blame you! ;) And I can tell you that it's awesome! It's a great fairy-tale/fantasy story, and I think you might just love it. :) Hope you enjoy it if you give it a try!

P.S. Thank you for following!

I would love to win. These look like great books!

Isn't Serena offering some great prizes?? :) And The Ryn is an awesome book! Good luck in the drawing! :)

Thanks so much! It's an awesome book! :)

Amber,you have left me wanting to read this story (or have it read to me, since my daughter loves to read out loud, complete with voices)! It sounds like a great re-telling with strong characters. I love the thought of the over-protective brother, and Ryn coming to terms for whom she must be willing to die. Very intriguing!

Aww, glad you enjoyed the review! That's so fun that your daughter reads to you, with voices and all! There are some interesting characters in this one that she could have fun doing the voices for. :)

I like over-protective brothers, too. ;) The heroine of this story actually has several, but there was one in particular that stood out to me with his reappearance at a later point in the story. He has a unique talent!

This is definitely an intriguing story. :) Hope you enjoy it if you read it (or have it read to you)!

Great review! I loved the first book and cannot wait to read the second! Serena has an amazing talent for writing! :)

Thank you! :) Serena is definitely talented! I'm excited to see what she has up her sleeve for future projects. :)