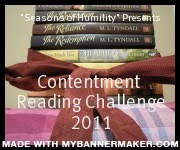 Welcome to the second month of the Contentment Reading Challenge 2011! If my counting is correct, I think we have 16 people now who have officially joined the challenge! But anyone is still welcome to join at any time, so if you're interested or want to learn more, click HERE.

As far as this challenge goes, I re-read one book in January, so I should probably pick up the pace somewhat soon! ;) I've still been keeping busy with new review books, as well as books for school. (I have to tell you, though, that I just finished Jane Eyre for my 19th-20th Century English Literature class for the first time ever!)

The first book I re-read for this challenge was The Redemption by MaryLu Tyndall. It was wonderful to re-visit this book! It was the first one I read by Tyndall, and I was so blessed to have all three of the books in the series at one time (which I received as gifts from my parents for Christmas one year, I believe), so I could just go from one to the other. Trust me--once you read The Redemption, you'll be very eager to pick up The Reliance, and then The Restitution!

The Redemption is a beautiful book full of great descriptions of the sea (you can find some examples HERE), adventure, romance, and reminders of God's love. I highly recommend it!

As for what I'm going to re-read next, I'm still thinking about that. I think it would be good to just go ahead and re-read The Reliance, but I'm also eager to re-read this amazing series by Jane Kirkpatrick soon about the Oregon Trail. I'd prefer to re-read that series sooner rather than later as we will soon be discussing the Oregon Trail in my Literature of the American West class. (Which is one of my favorite classes ever, I think!) ;) I just love the West!

So, now you know where I stand so far. How about you? If you've joined this challenge, have you made some progress yet? Are you enjoying re-reading some of your old favorites?

Also, before I conclude this month's update, I just wanted to ask which you would be most interested in to go along with next month's update: a special author interview with one of the authors whose books I'm re-reading, or a book discussion about a book many of us are interested in re-reading? I'd love to hear your thoughts!
Posted by Amber Holcomb at 1:00 AM

I've re-read parts of old books that I love. So I guess I should keep better track of that because eventually those parts will add up to a whole! LOL

I read 10 books in January!
You can find my post about it here.
I really enjoyed re-reading Mindy Starns Clark's Million Dollar Mystery series.
I'll probably add a few Lori Wick books and maybe some more from Janette Oke before the year is over.

I'll be curious to hear about the Jane Kirkpatrick series, I've never read her books before.

I've read two so far. I figure I have to read 2 a month to make my challenge goal. :)

Fools Rush in by Janice Thompson
A Passion Most Pure by Julie Lessman.

SO good to revisit those stores. I'm working on a Janette Oke, T. Davis Bunn book right now. I think it's the third time I've read this one. I am really enjoying it. :)

Hehehe, only if you want to! :) That would be fun, though, to re-read parts of different books until you eventually re-read a whole one. ;)

I know what you mean, though, about going back and re-reading parts--there are certain parts of old favorites that are especially enjoyable to revisit. :)

Wow!!! I am impressed--10 books already! I stopped by your blog and left you a comment on that post.

And I really enjoyed reading Lori Wick's books in the past, as well, especially her "Rocky Mountain Memories" series (I think that's what it's called). :)

I really enjoyed Jane Eyre! I mean, I got frustrated often, but it was very well-written and engaging/thought-provoking. :)

The series I'm hoping to re-read soon by Jane Kirkpatrick is the "Kinship & Courage" series about a group of women out on the Oregon Trail. I remember it was fascinating and wonderful to read it the first time, so I'm eager to re-read the three books, especially since we'll be talking about the Oregon Trail soon in my Lit of the American West class! :)

Way to go! I think averaging 2 books a month is a great goal, and I'm hoping to try for that if I can (although I only re-read 1 book for January). ;)

And I hope to re-read A Passion Most Pure this year, as well! Fabulous book! :D

I just finished The Redemption and it was fantastic! Thanks for recommending it :) I'll admit I was a bit surprised at some of the content but I'd be lying if I said it wasn't a fascinating, page-turner. But I think it was for the most part edginess with a purpose and not just edgy for edginess sake, so I'm sure I'll be reading the next 2 books in this series. Anyway, I'm trying to think up a review now that will hopefully explain what I mean better :)

I'm so glad you enjoyed it! It is a little bit heavy on the romance, but I think that you're right in that it's "edginess with a purpose." And I can't help but be thrilled when Merrick comes to her rescue! ;)

I hope you enjoy The Reliance and The Redemption, as well--both of them are wonderful!!! And I don't know if this will be giving anything away, but did you know that Kent plays a big part in both of them? I think you'll be surprised by how differently you feel about him by the end of the third book! :)

Looking forward to you review! And happy re-reading to you, as well! ;)

I think that is part of the reason I need to read the other 2 books because I don't want to leave this series with my current view of Kent. There was a glimpse, however brief, of goodness in him and I have a feeling that will grow and my view will change by series end, like you said :) And Merrick was a SWOON kind of hero, so I'd love to read more about him ;)

Don't worry--I can almost guarantee that your views of Kent will completely change, and you might even find yourself cheering for him! ;)

And yes, Merrick is definitely a "SWOON kind of hero," and while there are some difficult times ahead in The Reliance, I think in the end you'll love him even more. :) I do hope you get to read those next 2 books!!!

I picked up Vienna Prelude by Bodie Thoene to read, in fact it's sitting on my bed. But then I got into Here Burns My Candle by Liz Curtis Higgs, and before I finished it A Billion Reasons Why by Kristin Billerbeck was delivered. In other words, I've not started yet.

However a quick re-read of CML will count, so I'll be off and running soon!

It's always nice to have so much to read. :) Don't worry--I've only re-read one book for the challenge so far, so I'm not that far ahead of you! ;)

And I think re-reading Courting Morrow Little is a great idea!