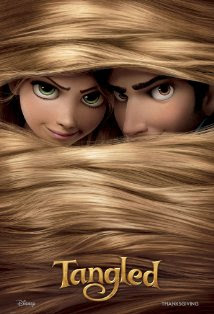 It was with great excitement and eagerness that I went to the movies with two of my friends this past evening. The excitement continued to build, even as we went to the wrong theater (which wasn't showing Tangled!) and had to backtrack a short distance to the right one. We made it just in time to watch a couple of previews and dive right into the movie!

From the start of the movie I found myself intrigued by the creative twist on the traditional Rapunzel story--how Rapunzel came to be in the tower, her story. In traditional Disney fashion there was some sweet magic involved, then evil tried to take over and hide that sweetness selfishly away.

Throughout the first half of the movie, I was pleased with how humorous it was! I laughed frequently and enjoyed the cleverness of the characters and some of the absurd situations they found themselves in. Without trying to give too much away, I do have to say there was one scene involving Rapunzel's angst that was absolutely too funny! Alternately overjoyed and "in the depths of the despair" (as Anne of Green Gables would say), it was hilarious watching her reactions to her new-found freedom, as well as watching Flynn's reactions to her. Love it!

Many of the secondary characters were rather quirky, which was great but perhaps a bit overdone in parts. I loved Rapunzel's pet chameleon, Pascal, because he was just too cute! The horse was certainly interesting with it's dog-like behaviors, and one of my friends noted later how it was similar to Bullseye's behaviors in the Toy Story movies, although the horse in Tangled is even more dog-like.

The romance was so sweet in this movie! I enjoyed watching it develop and seeing how caring and giving it became. One of my favorite scenes involved hundreds of lanterns and a boat. I won't say anymore than that! Well, except I will add that the animation, especially in that scene, was beautiful! And their discussion of dreams--what happens once they're fulfilled--is one I think many can relate to with a smile.

This movie was fun and it did have some surprises. On the other hand, while it was unique in some ways, it was rather similar to other Disney movies. Don't get me wrong--I love happily ever-afters! But this movie wasn't as powerful as many of the Disney Pixar, and some of the Dreamworks movies, are. I didn't cry during this movie like I did both times I saw Toy Story 3 in theaters. I wasn't quite as thrilled by it as I was by How to Train Your Dragon (which I watched recently and loved!). But it was still good, and I'm glad that I went to see it!

*This review has been posted on Corban University's online newspaper, Hilltop News! Check it out HERE!*

(Poster image from IMDb.com.)
Posted by Amber Holcomb at 1:19 AM

LOVE your review!! Sounds like you had a lot of fun with your friends :) I'm so excited to see this movie, especially after your review! And, that "hundreds of lanterns and a boat" scene is most intriguing and certainly sounds like romance is involved ;)

Thanks you for sharing your thoughts with us! Praying you have a beautiful day in Jesus!

Yay, so happy you enjoyed this movie! I'm really gonna try to see it this weekend. Thanks for sharing your thoughts!

Great review! I'm definitely taking the kids to see this one. Sounds like I'll enjoy it too.

I loved that scene! :D It was sooooo pretty! I personally love this movie just about as much as HtTYD, but that is just me :) Glad you enjoyed it!

Thank you! And yes--I did have a lot of fun! :) This was an enjoyable way to spend an evening, for sure!

I think you'll love that lantern scene, which does indeed include romance. ;) I hope you enjoy the movie when you see it, and that you have a great day, as well! :D

This movie was very enjoyable--lots of fun and very cute! :) If you get a chance to see it this weekend, I hope you enjoy it, as well!

Thank you! :D There's lots of adventure and fun aspects for kids, but I do think it's enjoyable for adults, as well. :) I hope you and your family like it, too!

Ah, me too! :) Wasn't it a lovely scene? Gorgeous animation!

I really did enjoy this movie. I think I might have like How to Train Your Dragon a little bit more, just because it was so unique, and you just gotta love a boy and his dog (or in this case, dragon!). ;) HtTYD was just so epic, and shared a great message about being understanding!

Anyway, thank you for stopping by! Tangled was so fun and sweet. :)

Hard to beat Pixar, I think. But I can't wait to see this one. And this was definitely a great review to whet my appetite. I've never seen How to Train Your Dragon. Both of those sound like good movies for my 5-year-old and I.

For sure! Pixar is simply amazing! :D

That being said, though, I think they are both great movies and I can't recall anything really "bad" in them. (There is some rebellion in Tangled, but I can understand why.) I highly recommend both of them--very sweet and enjoyable! And I was pleasantly surprised by how much I loved HtTYD! :D So good!!!

I liked this one too. The voices were perfect choices. :O)

I'm glad to hear it! :) Wasn't it fun? And I agree that the voices were great for the characters!

I'm with Amanda, I love your review too! This does sound like a film I would enjoy watching. I have been seeing it on TV and I just might have to take my sister to see it when it comes to our theatre here. :)

Thank you! :D I think you and your sister would enjoy it. It's a lot of fun!

My sister and I, along with one of my dear friends, are hoping to see the third Chronicles of Narnia movie over Christmas break together! It's so special to see movies with loved ones. :)

Eeeee I can't wait to see this! Hopefully it will still be showing by Christmas so I can go with my friends who are coming in from out of state! I'm so glad you liked it and posted this review! :-)

Thanks for the caution. Elizabeth has problems with intense scenes and monsters, we'll see though. Sounds great for Chris and I if not her.

Congrats on having your review posted in the college online newspaper! I'm hoping to go see this one with my little 5-year-old niece. Your review makes it sound very entertaining.

Congratulations, my friend, on getting your review posted in your schools online newspaper! That is so awesome! Is this the first time something of yours has been posted there? If it is, I hope this will be the first of MANY!

I think you'll love it! :D I hope you get to see it with your friends!

And thank you for the kind words--I'm glad you liked the review!

You're welcome. :) I don't think Tangled is too bad, maybe just a little scary in parts for younger children. Either way, though, I hope you enjoy it!

Thank you!!! :D I hope you get to see it--it is definitely cute and entertaining!

Thank you! You're so sweet! :D

Actually, my roommate is the editor of the online newspaper, and she was one of the friends who came with me to see the movie. She was hoping to have more movie reviews online, so I agreed to let her post mine. :) But it was still exciting, nonetheless!

Thank you for your kindness, my friend! And be on the lookout in the next week or two for a possible Christmas surprise... ;) I'm not telling you anymore than that for now!

I know! ;) Hope you have a wonderful weekend!

Love,love, LOVE the review! So eloquently written. I just saw this with my 6 yr. old nephew and LOVED it. The scene where Rapunzel acts a bit "unsure" about her new freedom was the funniest scene. And loved the horse, I he infect reminded me of my dog. LOL;)

The only complaint about the movie came from my nephew, and it was that "The golden hair was GONE!(insert young child’s sniffles HERE). LOL I do agree, not as powerful as many of Disney's other films, but great nonetheless.

So good to see you again, my friend! :D Thank you so much for your kind words; you sure know how to make my day! :)

Wasn't that scene too funny? I was cracking up at her ups and downs, and how Flynn just watches the whole thing in boredom. ;) And then his observation: "So...I think I get it. Your mom is a tyrant. You want to get out of the house, but you're afraid you'll break her heart..." (etc.) Too funny! ;)

And I know how your nephew feels. Sad, but in a good way. ;)

Thanks for sharing your thoughts! Love ya, too, Ashley!

Today is my sister's birthday, so I told her we are going to go watch it when it comes to town. (a HUGE treat for us), so was SO excited, it made my entire day!

And hey, February is looking like a pretty sure thing. *wink*

Happy birthday to your sister! :D How fun that you're going to go see this movie--I hope you enjoy it!

And yay! I really hope that February works out! I'm thinking maybe I should post about the conference to let more people know about it. :) I think it's so cool that such a well-known author is coming to our school!