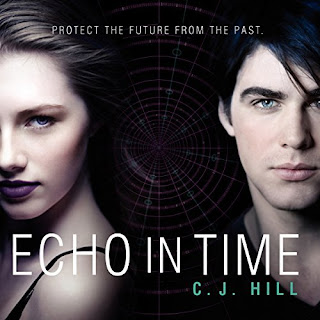 After being pulled 400 years into the future, twins Taylor and Sheridan found some refuge from the government of Traventon, which used the dangerous Time Strainer to yank the girls from the past. Yet the threat of the dangerous technology still looms. Taylor and an ally, Joseph, are selected to go on a mission to destroy the time machine and weapon. But their actions before they do may have major consequences for the future and the past.

Action-packed and romantic, this futuristic sequel to Erasing Time is perfect for fans of dystopian and sci-fi novels such as The Maze Runner by James Dashner, Across the Universe by Beth Revis, and Matched by Ally Condie.


Purchase on Audible | Add to Goodreads

I confess I knowingly came to this story unprepared, as I haven't read (or listened to) Erasing Time, which is the first book in the series. That did make it a little trickier for me to get invested right away...added to the fact that the narration initially feels a little too casual for a dramatic story like this one.

However, both the story and the narration won me over in time. :) (Reference to the audiobook's title intended!)

I've read several books by Janette Rallison (AKA C.J. Hill), and I'm a big fan of her My Fair Godmother series. While this particular book didn't end up being a favorite, I found it enjoyable and engaging once I became more familiar with the main characters and once the plot really took off with a mission to make things right...which led to a lot of things going quite wrong.

I really appreciate the fact that this story offered some surprises for me (which might have been partly due to me being unfamiliar with book one, but I bet those who are familiar with the series appreciate knowing what happens to the characters after Erasing Time). It's interesting to see how Taylor, Sheridan, and the team adapt to unexpected twists and consequences. When you mess with the time stream, all sorts of mayhem can ensue!

As for the narration, it came across a little flippant and perhaps disengaged at times...but I'm not sure if that might simply be a result of how I heard the narrator's main accent. Ultimately, though, different characters stand out in the voices he performs, and I was impressed with the range of accents and tones the narrator could pull off!

While it wasn't always easy visualizing what was happening, especially at the beginning (being unfamiliar with book one), the story and its characters pulled me in as they faced a range of challenges and discovered love in the midst of danger and change. This is an entertaining futuristic story about the difficult choices that come with power, intelligence, and unalterable circumstances.

*With thanks to the author for providing me with a complimentary audiobook download. This review is my honest opinion.*
Posted by Amber Holcomb at 3:48 PM

Email ThisBlogThis!Share to TwitterShare to FacebookShare to Pinterest
Labels: audiobook, review, YA fiction