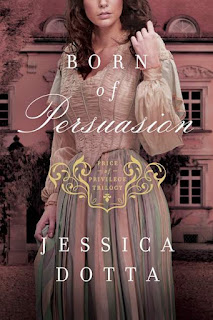 About the Book (from Tyndale)

The year is 1838, and seventeen-year-old Julia Elliston’s position has never been more fragile. Orphaned and unmarried in a time when women are legal property of their fathers, husbands, and guardians, she finds herself at the mercy of an anonymous guardian who plans to establish her as a servant in far-off Scotland.

With two months to devise a better plan, Julia’s first choice to marry her childhood sweetheart is denied. But when a titled dowager offers to introduce Julia into society, a realm of possibilities opens. However, treachery and deception are as much a part of Victorian society as titles and decorum, and Julia quickly discovers her present is deeply entangled with her mother’s mysterious past. Before she knows what’s happening, Julia finds herself a pawn in a deadly game between two of the country’s most powerful men. With no laws to protect her, she must unravel the secrets on her own. But sometimes truth is elusive and knowledge is deadly.

While I'm tragically late to reviewing this first book in the Price of Privilege series, I can tell you that it was worth finally reading and savoring! I love that the author's bio claims her blending of Austen and Bronte, because she does such an excellent job of it. The witty observations of humanity and sometimes outlandish characters and dialogue point to Jane Austen's style...but there are heavy echoes of Jane Eyre and Mr. Rochester throughout the story and setting.

Not to fear, though, as Born of Persuasion is still entirely unique! While Mr. Macy reminded me of Mr. Rochester at times (and was bothersome in some of the same ways), these characters are very much their own, full of complexities and inner conflicts. And goodness, the turns this plot takes! Toward the end, it's one awful revelation and danger after the other. While it feels a bit cyclical at times, it's still a thrilling chase that sends pages flying and leaves burning questions all over the place.

Based on the ending of this first book, I'm guessing this series should be read all together and in order if you want the full scoop and best experience. Still, on its own, this first installment offers a great mystery, moral food for thought, and subtle but encouraging character growth in Julia, the heroine. There is hope...but also a whole lot of uncertainty and potential pitfalls ahead.

Fantastic writing for those who love danger and drama mixed into a historically elegant read, Born of Persuasion is fascinating, and I look forward to diving into its sequel, Mark of Distinction.

*With thanks to the author and Tyndale House Publishers for providing me with a complimentary ARC of this book. Opinions expressed in this review are completely my own.*
Posted by Amber Holcomb at 9:55 AM

I'm not a Jane Eyre fan, but I love Austen, and I think this sounds unique enough that I'd want to try it. Great review!

It's definitely a unique storyline! If you're not a Jane Eyre fan, be forewarned that Born of Persuasion is also pretty dark and mysterious. :) But it's really intriguing and has me eager to read book 2!

Thanks so much for checking out my review and for your kind words!