From Fairy Tales to Regency Romance | Review of A Spy's Devotion 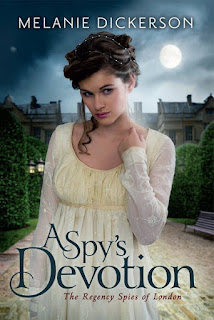 Nicholas Langdon is no stranger to reserved civility or bloody barbarity. After suffering a battlefield injury, the wealthy, well-connected British officer returns home to heal—and to fulfill a dying soldier’s last wish by delivering his coded diary.

At the home of the Wilherns, one of England’s most powerful families, Langdon attends a lavish ball where he meets their beautiful and intelligent ward, Julia Grey. Determined to maintain propriety, he keeps his distance—until the diary is stolen and all clues lead to Julia’s guardian.

As Langdon traces an evil plot that could be the nation’s undoing, he grows ever more intrigued by the lovely young woman. And when Julia realizes that England—and the man she is falling in love with—need her help, she finds herself caught in the fray.

Will the two succumb to their attraction while fighting to save their country?

Melanie Dickerson has made the transition from historical fairy tales to Regency romance with ease! I enjoyed the setting and character descriptions of A Spy's Devotion, as well as the steady pace of the story, urged along with bouts of danger. Dickerson knows how to craft engaging tales set in long-ago eras.

The hero, Nicholas Langdon, was a gentleman. Perhaps a bit too much so in some ways, because I wouldn't have minded if he was a bit clearer regarding his feelings and said what needed to be said when it ought to have been said. ;)

And the heroine, Julia Grey, was both brave and kind-hearted. She was tender when the situation called for it, but also very loyal to her country.

If you're a fan of Melanie Dickerson, a lover of sweet romances, and/or a fan of Regency stories with a bit of intrigue, then you'll want to check out A Spy's Devotion. It's a great start to The Regency Spies of London series!

*With thanks to NetGalley and Waterfall Press for providing me with an e-ARC of the book in exchange for my honest opinion.*
Posted by Amber Holcomb at 8:30 PM

I'm glad you really liked this one! I've been looking forward to it. I enjoyed her last book, so I've been hoping I'd like this one too. Great review!

Thank you! I hope you enjoy this one, too. :) It's hard to go wrong with Dickerson's books if you like sweet romance!

Glad you stopped by!

Sounds like this is a sweet story. I like the idea of it being a "spy" novel set in the regency era. For my normal reading, that's something unusual. :)

Melanie Dickerson definitely writes sweet stories - and this one is no exception! And the spy twist is an intriguing element, for sure. :) Hope you enjoy this one if you give it a try!